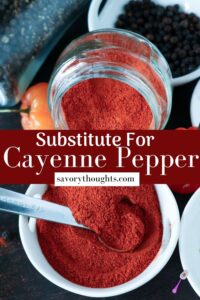 If you are on a constant hunt for substitute for cayenne pepper, your search is over! Adding heat to a dish can instantly transform the meal to something more exciting.

Research shows adding spice, and of course, most often includes heat from peppers in your meals may help reduce your risk of dying from heart disease or cancer.

What Are Cayenne Peppers?

Dating back to the 15th century, cayenne peppers were brought to Europe and were found to be grown in Central and South America. They are a type of chili pepper, and they are 10 to 25 cm long, often thin, with a bright red hue.

Cayenne pepper is the mother of all spices. This reddish-brown spice not only taste great in foods, like in this Rasta Pasta recipe, this Baked Lamb Chops, or in this Vegan BBQ Sauce, the pepper may help reduce the risk of certain health issues as stated above.

Not only do they have some medical benefits, which we recommend you speak with your doctor regarding these benefits, and how it applies to your health; but cayenne pepper is also great for cooking and encompass several nutritional benefits.

Depending on where you are in the world, you may come across African bird’s eye pepper. This small chile, grows only about 1 inch, but do not let the size fool you as these peppers are extremely spicy.

In contrary to its name, dragon’s breath peppers are not the hottest peppers in the world. The Carolina Reaper is still the official spiciest pepper resulting with the most heat.

You can find this fiery red pepper in the United States. The Carolina Reaper is also listed in the Guinness World Records officially the world’s hottest chile pepper. If you like sweet and spicy foods you’re in luck, the Carolina Reaper is known to have a sweet and fruity flavor, just before the spiciness kicks in.

From the very start the Komodo Dragon do not disappoint. As you first take a bite out of this pepper, your mouth instantly acquainted with the heat, followed by the full effect of the heat this hot fruity pepper has to offer.  You can find the Komodo Dragon in the UK it is grown by the largest producer of chillies, Salvatore Genovese.

Produced in England by chilli farmer Gerald Fowler, and before the Carolina Reaper was even thought of to be the hottest and spiciest pepper in the world, the Naga Viper held that title. According to reports, this pepper grows in a greenhouse during wintry weather.

The pepper is a three-way mixture produced from the Naga Morich, Bhut Jolokia, and the Trinidad Moruga Scorpion pepper.

Trying international food is one thing, but trying international food with some heat added to it will definitely create an unforgettable experience. Native to North East India and the Sylhet region of Bangladesh, and sometimes refer to as snake or serpent chili, the Nafa Morich pepper is an extremely hot pepper with a unique taste of woody, smoky flavors.

Known as Nagahari, Bhut jolokia, Bih jolokia, Raja chilli, Borbih jolokiai, or Raja Mircha, the Bhut Jolokia is the ultimate (referred to) Ghost Pepper. You can find it in the Nagaland and Assam region of northeastern India and parts of neighboring Bangladesh. Bhut means “ghost”, and this pepper was referred to that as the flavor and spiciness sneaks in one’s pallet when one least expects it.

Native to Moruga in Trinidad and Tobago, and was once identified as the newest hottest chili pepper in the world by The New Mexico State University’s Chili Pepper Institute in February 2012, the Trinidad Moruga Scorpion, has a fruity-sweet and spicy combination.

Continuing with our Caribbean journey, the Trinidad 7-Pot/Pod is known to provide enough heat to spice up 7 pots of stew. They look very similar to habenaro peppers, and comes in many different colors.

Tested in the fall of 2019 by Southwest Bio-Labs in Las Cruces, NM, created Bob Jones of Jones Peppers, the Jones19 peppers is a mixture of the Carolina Reaper and Ghost Pepper.

The Red Savina pepper is a cultivar of the habanero pepper, which has been selectively bred to produce hotter, heavier, and larger fruit.

The White Bullet Habanero is a heated mixture of the Caribbean Habanero, and is trademarked by Redwood City Seed Company in Redwood City, California.

This is a staple pepper to use in Haitian Cuisine. You can find Scotch Bonnet throughout the Caribbean. They are bright colored Jamaican hot chiles and they have a sweeter flavor and stouter shape, distinct from its habanero cousin.

These peppers range in heat temperature, but they are known generally as the Peruvian hot pepper.

Belonging to the Capsicum Baccatum family, the Aji Cito chili pepper is possibly the hottest one of all.

This brightly colored pod is very popular in the Caribbean, predominantly in Puerto Rico, Cuba, Haiti, and the Dominican Republic. It has a sweet flavor and mild heat.

Bell peppers are known to have a sweet taste. Although they have no heat, they are popular in many different cuisines around the world, sold in many colors.

The Fire of Love! With a name literally translates from German to “Love Apple”. This is a sweet pepper with a thick fleshed chili pepper. The Liebesapfel Chili Pepper is a cross between an apple and a tiny pumpkin.

The Bolivian Rainbow pepper look absolutely beautiful in the garden. They have grown for centuries in Bolivia (Central South America. The peppers first appear as a dazzling purple color and turn yellow to orange to red.

Just like the Ghost peppers listed above, the heat from the Fatalii peppers also sneaks up on you. Originated from the Central and southern Africa, they are considered as one of the hottest peppers in the world. They consist the heat level of a habanero, but with a more citrus and fruity taste.

Thai ornamental is a very hot pepper with an upward point. They can grow wild in places such as Saipan and Guam.

These peppers grow on a short, bushy plant, giving rise to clusters of upright peppers. They turn bright red when fully matured.

No one knows for sure where the Diablo Grande originated. However, they are hotter than the jalapeno and serrano peppers. They come from the same family as the jalapeños, poblanos, cayenne, and Serrano peppers.

Enter the twilight! Hahaha – Just kidding! The Numex Twilight is an ornamental chili pepper that developed at the New Mexico State University. These peppers usually start out purple, then becomes yellow and orange, and becoming red when fully ripe. They are knon to have a rainbow effect on the green plant.

As pretty as its name, the Cheyenne pepper is very attractive. You can easily find this pepper in the United States. They do not require much to care for them, and little light is needed or recommended.

In contrary to its name, Fish peppers are somewhat rare chili peppers of medium heat. They are with fruity, tangy and they used to be well known in the American Atlantic region.

We love our salsa, and chilis, and Pico de Gallo. The Jalapeño pepper is the world’s most popular chili pepper. It is a medium-sized chili and is usually consumed while still green, but they can turn bright red when fully matured.

One of Mexico’s favorite peppers to use. They are actually a smoked red ripe jalapeño pepper. Chipotle is used primarily in Mexican and Mexican-inspired cuisines.

Beautiful just like a cherry, Cherry Peppers are round peppers that mature quickly from green to brilliant red. They are not too spicy, and they work well with pickled foods.

Bright like a lemon, and flavored to resemble the juiciest lemon, this pepper is also known as Kellu Uchu in Peru, where it originated. They are also often compared to the flavors found in habanero.

With endless options to be found throughout the world, you are sure to find substitutes for Cayenne Pepper. Here are some frequently asked questions to keep in mind.

What cayenne pepper does to your body?

Is cayenne pepper the same as chili powder?

No. Cayenne pepper is not the same as chili pepper. The flavors are also quite different.

Studies show that Cayenne pepper can help with weight control as it keeps you full longer, increase metabolism, and decrease your urge to eat.

How To Use Cayenne Pepper

Aside from tasting great in foods, some people use cayenne pepper in home remedies for coughs, congestion, and to fight off colds.

If you are curious about the dishes to include cayenne pepper to, or the substitutes, you are in luck. Below are some of our favorite Haitian food dishes that works well with some heat.

Consider adding heat to one of these fried appetizers listed below.

We would love to know if you tried any of the peppers listed above, or any of the dishes mentioned using cayenne pepper, tag us on Instagram or Facebook so we can see your beautiful dish.