Resources » Food That Starts With C 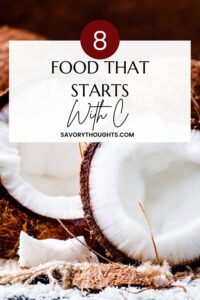 What are your favorite Food That Starts With C? As part of our alphabet blog series, we’ve compiled a list of foods from around the world that start with ‘C’.

Some you may eat on a regular basis, but some you may never have even heard of.

Here are our top picks for foods beginning with ‘C’.

Cocoa is the name for the seed of the Theobroma cacao tree once it has been roasted (unroasted, it is cacao). While it can be bought in powdered form, cocoa is most commonly known as one of the main ingredients of chocolate.

While cocoa on its own isn’t unhealthy, the products it is used to make often have large amounts of fat and sugar added to them (for instance, milk chocolate).

For a healthier choice, either choose cacao (the unroasted seed), or choose a cocoa product that has fewer added ingredients, such as dark chocolate.

Next on the list with food that starts with C is Calamari comes from the Italian word for squid and can be used interchangeably. Often, the word calamari refers to deep fried squid rings that are served as a popular appetizer around the world.

When not deep-fried you will often find calamari rings as an ingredient in pasta dishes, paella or simply grilled, generously seasoned and finished with a squeeze of lemon juice.

Squid has a mild, slightly sweet flavor and firm flesh, making it a tasty dish even for those who aren’t so fond of fish. Like a lot of seafood, squid is high in protein and is a good source of both zinc and vitamin B12. These days, pre-prepared squid rings can be easily found (usually frozen) in stores.

We cannot name food that starts with C without mentioning cauliflower. This unusual looking vegetable belongs to the cabbage family that is grown in many countries across the world.

It is very high in water and fiber along with a long list of minerals, vitamins and antioxidants, making it a healthy addition to any meal.

Cauliflower is a highly versatile vegetable that can be cooked in a wide variety of ways including steaming, roasting, frying, boiling, and turning into cauliflower mash.

While it is usually only the head of the cauliflower that is consumed, the leaves can also be eaten.

In recent years, cauliflower has become a popular option for those on a low-carb diet to use in place of mashed potatoes, rice or even pizza crust.

The calzone, translating as ‘pant leg’ or ‘trouser’, is said to have originated in Naples in the 19th century, invented as a more portable alternative to the classic pizza (they were much smaller than the calzones you will find in restaurants today).

Calzone is typically filled with a mixture of cheese, salami, ham and vegetables, and unlike regular pizzas they do not contain tomato sauce.

Calzone is not to be confused with panzerotti, which is made of pastry and fried. Calzone are made from standard pizza dough and baked in the oven to achieve a crisp, golden brown shell containing the delicious, gooey filling.

Soft and spreadable, cream cheese has a mild, slightly tangy taste and is made by adding lactic acid bacteria to a mixture of milk and cream.

Cream cheese is a versatile ingredient used in both sweet and savoury dishes, or on its own as a spread for bread, bagels and crackers.

In sweet dishes, it is most commonly used as a primary ingredient in cheesecake, or is mixed with confectioner’s sugar to make cream cheese frosting.

Unsurprisingly, given its key ingredients, cream cheese is high in fat, but it is a good source of vitamin A, B12 and several antioxidants.

As with all cheeses, it is best consumed in moderation, though there are lower calorie options widely available in stores.

Cashews are small, kidney-shaped beans that come from the cashew tree. Grown in tropical climates, cashew nuts are imported all over the world and are commonly considered a snack nut, although they are also used as ingredients in desserts, stir fries, noodle dishes and curries.

Cashews are also a popular ingredient in vegan cuisine, as they can be transformed into a creamy substance that can be used as an alternative in many recipes containing cream or cheese.

Cashews are rich in nutrients, a good source of fiber and protein and are also low in sugar. However, like all nuts, they are also high in 9heart healthy) fats and are therefore fairly calorie dense.

As a result, they are an extremely healthy addition to any diet, but should be consumed in moderation.

Otherwise known as deer or elk, caribou is a game meat available from specialist stores. Caribou can be eaten in a variety of ways, as steaks or burgers, in stews, chilli or meatloaf, or even dried and made into jerky.

Though it is technically game, it has a lighter taste than many other game meats and also has very little fat.

It is incredibly high in protein (three times as much as beef) and is a rich source of various other nutrients.

As caribou are not farmed, any caribou meat you buy will be organic, free-range and grass-fed, offering a healthy alternative to more traditional meats.

Coconut flesh is consumed either on its own or transformed into coconut milk or oil. Coconut milk features heavily in Asian cuisine, while dehydrated coconut flesh is a popular ingredient for cakes and other sweet dishes.

The water contained within the coconut has also become increasingly popular over the last few years, with many different brands of plain and flavored coconut water on the market.

Coconut is moderate in carbohydrates and protein but high in saturated fat and fiber. It contains a variety of minerals, including manganese, potassium, and iron and makes a great addition to a balanced diet.

More Food To Learn About

Hope you enjoyed this compiled list of food that starts with C.

The list goes on and one when it comes to learning about food beginning with C, for now visit our list of foods from other letters from the alphabet!

Food That Starts With Y

Food That Starts With F

Food That Starts With D

Food That Starts With B

Food That Starts With A

We would love to know if you tried any of the recipe or foods listed above from this site, tag us on Instagram or Facebook so we can see your beautiful dish.