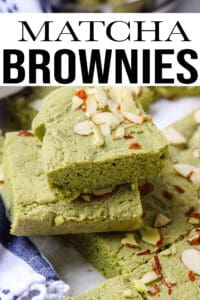 These matcha brownies help you combine the nutrients and healthy component of green tea leaves and the sweetness and sugar of white chocolate, in one snack!

Brownies are popular snacks. But who says you can add a bit of healthiness and wellness to this sweet snack.

A matcha brownie takes the vibrant green color and is made using matcha powder and white chocolate instead of the dark chocolate and cocoa powder used to make the normal brownies.

Matcha itself is a powder made from green tea leaves. Thus, it is responsible for the bright green hue that it gives the snack as well as a hint of bitterness as well as a grassy flavor.

If you are a big fan of green tea, you will enjoy the matcha brownies the same way you enjoy the green tea ice cream and other green tea-inspired snacks.

It is important to mention that due to the addition of matcha, the matcha brownies contain more caffeine than a cup of coffee.

However, it won’t give you jitters like caffeine in coffee does, because the green tea powder contains a compound known as theanine.

While the first matcha brownies can be traced back to a few years ago, the constituents of this snack have a considerable history that is worthy of mention.

The history of matcha started as far back as the 8th century in ancient China.

However, it was not popular until the 12th century when a Buddhist monk Myoan Eisai, learned of the process of making powdered tea from steam-dried tea leaves.

The monk introduced the powdered tea to Japan when he realized that drinking this tea helped with his Zen meditation.

Thus, this tea became popular in Japan, from where it got introduced to other parts of the world.

As for brownies, the world has a certain Bertha Palmer to thank for the existence of brownies. Her husband owned the Palmer House Hotel and was going to host the Chicago World Columbian Exposition in 1893.

She asked one of the chefs working in the hotel for a dessert that is appropriate for the ladies attending the event.

What came out of that request is what we know today as brownies, although it was graced with apricot glaze and walnuts.

At the time that Bertha Palmer requested it, it was not known as a “brownie”. The word “brownie” was first used in 1896 in the Boston Cooking-Book Cook Book made by Fannie Farmer.

But it wasn’t until 1899 that the first known recipe for brownies was made public in the Machias Cookbook.

From that point on, brownies become a popular snack or dessert in the US, and from there, their popularity spread to other parts of the world.

This is the most important component of a baked snack. It gives the matcha brownie substance, and without it, these green tea brownies will be a gooey and oily mess.

All-purpose flour is a perfect type of flour to use for the matcha brownie.

There are different grades and types of matchas. However, they are grouped into only two categories, namely the culinary and ceremonial grades.

However, you should know that you can also use ceremonial grade matcha for making the green tea brownie.

This is because it has the brighter color of the two grades, and it also tastes better.

Regardless of the green tea powder grade, you decide to choose, you should make sure to get the fresh powder. This is because matcha tends to oxidize very fast.

Thus, you should use the freshest matcha available and use it as soon as possible.

White chocolate does two functions in the matcha brownie; one is important while the other is optional. The important function involves the use of the white chocolate in the batter, giving the brownies a fudgier texture and feel.

The optional function is the use of white chocolate in the batter used at the end of the baking process.

Contrary to the opinion that “cultured” defines how fancy the butter is, the definition of cultured in this sense revolves around how fermented the cream used to make the butter is, before being churned.

Most butter in Europe is made this way, and this is why they are more buttery than uncultured butter.

Due to the well-fermented cream, the level of diacetyl in the butter is high and this accounts for the buttery nature of butter.

Unsalted butter is also better for baking as you can never tell the amount of salt present in the butter.

But with unsalted butter, you get to add only salt to the snack, thereby making it easier to determine the total amount of salt present in the snack.

This is another important component that makes up the matcha brownie. You should use the granulated white sugar if you don’t want to tamper with the color of the brownie.

If you use unrefined sugar instead, you might end up with a mossy green tea brownie.

Your matcha brownies can stay fresh for 2-3 days at room temperature and can also stay fresh for a week if kept in a fridge in an air-tight container.

They can also spend up to three months in a deep freezer. As with the fridge option, you need to keep the snack in an air-tight container.

Should I Reheat My Green Tea Brownies?

After storing the matcha brownies in the fridge or freezer, the snack will turn cold and many people might want to reheat it.

It is perfectly normal and acceptable to reheat the matcha brownies. Let the snack spend a few seconds in the microwave and it is ready.

If you also prefer the snack fresh from the fridge, it is perfectly normal and also acceptable.

If you love these brownies, we recommend that you try one of these recipes next.

It warms our hearts to see the recipes you make from this site, and we’d especially would love to know if you tried this recipe.

Also, we would appreciate if could give it a star rating below! 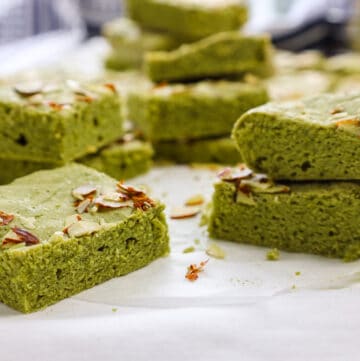 Use a high-quality white chocolate when making these brownies. The high-quality chocolate is sweeter; therefore, you will not require a lot of sugar.  **** When printing the recipe, please unselect the camera so that the pictures are NOT printed with the recipe (if preferred). *** Calories are estimated per serving