Resources » Food That Starts With E 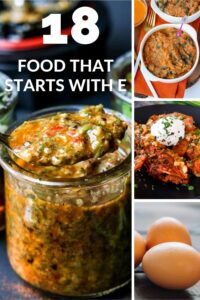 We have compiled a list of some incredible foods that start with E. Amongst some of these foods are some that are considered superfoods that everyone should try to add to their daily diet.

Expand your vocabulary with our top list of our favorite food that starts with E.

As part of our blog series, as we work through the alphabet, we’ve compiled a list of foods from around the globe beginning with E.

Let’s open our minds and think of the foods we love and once loved, help expand our knowledge with this catalogue of food that starts with E.

From Epis to Eggplants and Eggplant Parmigiana, and from Emu berry to Emu Apple Fruit, here are our top list of food that stars with E! Hope you ENJOY the list!

The first on our list of foods that start with E, is the Emu Berry.

The Emu Berry is native to the Australian region. The tree itself grows more like a bushy plant. It is a tiny berry fruit that is sweet and is also known as Dysentery Bush.

Emu Berry is rich in calcium, dietary fibers, vitamin, and iron. It is said that consumption of the boiled is good at relieving cold and flu.

A common Jamaican dish marinated in a peppery vinegar base sauce made of fried fish whether it is red snapper, king fish, or mullet.

The fish is well seasoned with spices and herbs and then fried. The sauce is well decorated with scotch bonnet peppers, onions, and carrots which is placed on top of the fish when served.

The next on our list of foods that start with E, is the Emu Apple Fruit. Native to Australia, it is purplish-red in color.  It is an extremely delicious fruit with a sweet and spicy apple flavor.

It also has 4 times the amount of antioxidant than blueberries. This fruit is one of our superfoods if you can find it.

It can be eaten fresh or used in various dishes such as pies, jams, wines, and or salads.

Eggs have been around for many years. Probable one of the most popular overall foods such in almost all culinary cuisines.

Most commonly used type of eggs are chicken eggs, but there are various eggs from ostriches to crocodiles. Eggs does contain vitamins and minerals that are essential to a healthy diet.

A great source of protein to help build healthy muscles. It also has nutrients to help in energy production.

It also contains vitamin A, B-12, and folic acid to help maintain a strong immune. But there have been some controversies regarding cholesterol. Like everything else, I say, use in moderation.

This very popular dish from our list of foods that start with E is also known as eggplant parmesan. It is an immensely popular dish with many different versions that are not native from its origin, Italy.

The eggplant is usually breaded before frying, which does take away the actual flavor of the eggplant. However, in the traditional version, there isn’t any frying.

Next on the list of food that starts with E is the Epis. Haitian Epis is used as the base for almost all Haitian recipes. It is a perfect blend of fresh natural herbs, garlic, olive oil, vinegar, and peppers.

The elderberry fruit is a little bitter blueish-black fruit that grows in the wild all-over North America.

There are different species of this fruit that is used as a natural coloring agent. It contains 80 percent water and is also known to help reduce the duration of the flu, but it does not prevent it.

We are not talking about the communal section in the Northeast of Haiti. Nope, this is the French translation to Crayfish and or Crawfish.

Ecrevisse is a freshwater crustacean resembling a lobster.

A little smaller in size compared to the lobster, but fairly popular in Louisiana. If you have not tried the crawfish Po’ Boy or crawfish etouffee, you are in for a treat.

The food on our list that starts with E is the Canistel fruit better known as eggfruit. It is bright yellow with a dense cake-like texture similar to a boiled egg yolk.

This fruit can be eaten on its own or added to a smoothie. Native to Central and South America, parts of the Caribbean, and Asia.

Eggfruit is said to help rejuvenate the skin and promote healthier hair. It has been used to help with coronary heart disease and some brain disorders. The plant itself is rich in nutrients known as carotenoids, which may help fight cancer.

Most commonly known by its purplish color, a spongy like fruit is used in various cuisines. Eggplant is nutritionally low, but it is great at absorbing oils and flavors.

The Earthnut is a Northern African and Eurasian plant with a tuberous root that is edible when cooked. It is in the same family as parsley with underground roots resembling a chestnut.

Initial thoughts of hearing eggnog are the holidays.

Eggnog, known historically as milk punch, is a dairy based drink that can be complimented with alcohol.

Made with cream, milk, sugar and eggs, is a delicious drink and extremely popular from Thanksgiving all the way to New Year.

And when only adults are enjoying this treat, alcohol such as rum or whiskey can be added to give a little more zing.

Eel is a ray-finned fish with a snake-like elongated body belonging to the Anguilliformes order. There are various types and some can be fairly vicious towards human.

But for the purpose of this list, we are interested in our consumption of eel and not the other way around. Eels can be roasted in a buttery garlic sauce or grilled after being well marinated.

Who does not enjoy a good dessert? Éclair is a soft elongated pastry filled with cream and usually topped with a chocolate icing.

The dough is usually baked to a crisp until hollow inside. Once cooled, it is than filled with cream and chocolate fondant icing is added as a topping.

Elephant apple fruit known as Dillenia indica is an evergreen shrub. This fruit is native to Asia and can be consumed ripe or unripe stages.

Wild elephants’ native to the area has a particular fondness for this fruit, hence the name elephant apple fruit.

The fruit is a large greenish-yellow fruit. The pulp is bitter and sour and has been used in jams, curries, and chutneys.

Some added benefits of this fruit is used to cure stomachaches and fatigues. The gummy substance extracted from the fruit and rubbed on the scalp can help with hair growth and treating dandruff.

The English walnut is extensively cultivated due to its edible seeds. It is sold commercially. though it is highly cultivated across Europe, it derives from Iran (Persia).

It is also known as the Persian walnut. Walnut is consumed around the world as snacks or added into various dishes.

Walnuts are high in vitamins and minerals to include vitamin B-6 and E, folate, a combination of fiber and healthy fats and proteins. If you are not allergic to nuts, they are certainly a great addition to your daily diet.

This popular Mexican dish is made of corn tortilla rolled around a filling and covered in a savory sauce.

Depending on how it is made or ordered, the filling can be anything from cheese to potatoes and everything else in between.

The Eastern Hawthorn fruit known by its scientific name as the Crataegus Aestivalis, is a very common fruit in the Eastern U.S.

This fruit is used to make jelly or wine and can also be added to salads. They have an acidic flavor which is perfect for jams. The seed however is not to be eaten as it is poisonous.

Edamame is a dish made out of soybeans boiled or steams in their pods. It is considered a legume and is extremely popular in Asian cuisines.

The pods are boiled or steamed with salt or some other condiments.

Edamame is high in soy protein, which is a great added benefit, especially for vegans. It won’t raise your blood sugar and it may lower cholesterol and risk of cancer.

But it is a soy product and those with allergic reaction to soy should avoid this legume.

More Food To Learn About

Hope you enjoyed this compiled list of food that starts with E.

The list goes on and one when it comes to learning about food beginning with E, for now visit our list of foods from other letters from the alphabet!

Food That Starts With Y

Food That Starts With F

Food That Starts With D

Food That Starts With B

Food That Starts With A

We would love to know if you tried any of the recipe or foods listed above from this site, tag us on Instagram or Facebook so we can see your beautiful dish.